Many big new copper mines likely to be needed – Anglo 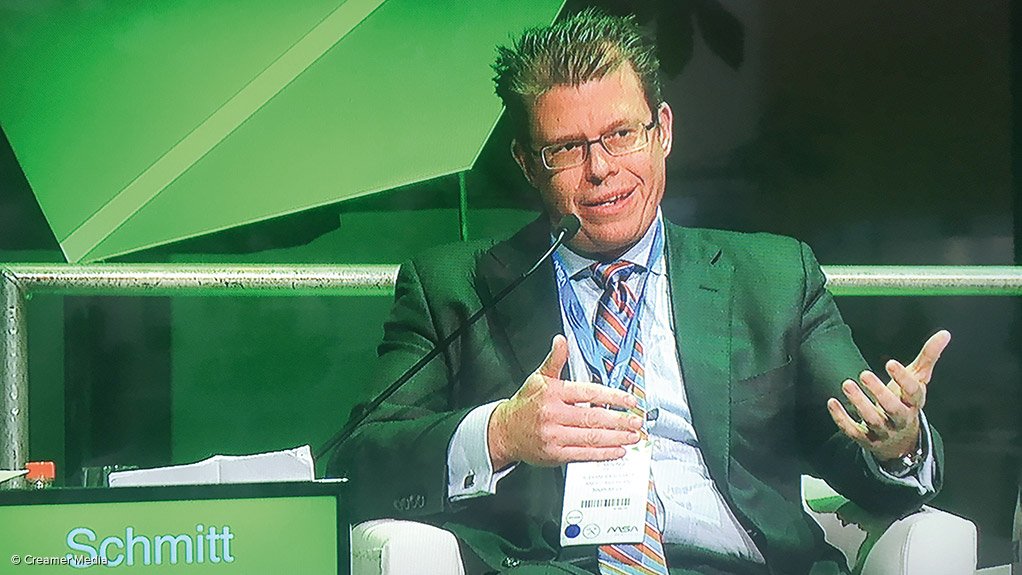 CAPE TOWN (miningweekly.com) – Based on two relatively moderate and reasonable growth assumptions, the world will need the equivalent of another 22 Collahuasi copper mines to meet expected copper demand by 2030, Anglo American base metals marketing head Alex Schmitt said on Tuesday.

Collahuasi, which Schmitt described as the second biggest copper mine in the world, produced 506 000 t of copper in 2016

“That’s a true supply cliff that mining needs to deliver,” Schmitt said during a panel discussion at the Investing in African Mining Indaba, at which Creamer Media’s Mining Weekly Online is taking part.

Working on the assumption that the growth rate of copper over the next 13 years is 2% a year, which in historic terms is not high, the estimate is that the world would need the equivalent of another 13 Collahuasi copper mines by 2030.

Add to that the assumption that global copper consumption would rise from the current 3 kg per person to 4 kg per person, which is not considered unreasonable, and it would rise to the need for the equivalent of another 22 Collahuasi mines to come on stream.

However, there was nothing like that number of copper mine projects in the pipeline.

He calculated that in 30 years, the current population of the world of seven-billion people was projected to rise to ten-billion people, and the world’s two-billion people considered middle class were expected to increase to five-billion in the next ten years - the time that it would take to build one new Collahuasi.

On population growth alone, 60% more electricity would need to be generated and as copper was the best conductor of electricity, major demand pressure was poised to be placed on the base metal going forward.

To generate the huge amount of additional electricity required and also distribute it, would, in turn, lift that demand exponentially.

On top of that, copper was also poised to play a major role in reducing carbon dioxide emissions to mitigate climate change.

International Finance Corporation principal mining specialist Steve Potter said there was no doubt that there would be an increase in demand for copper and he did not believe that there was a shortage of copper deposits per se, but only in steps being taken to mine those deposits.

Anglo Pacific and Audley Capital managing partner Julian Treger pointed to the reluctance of the mining majors to invest in large mines, even ahead of additional demand that can be created by electric vehicles (EV), solar or wind, which could itself add up to a million tonnes of copper demand a year in the next decade.

“I think the price of copper is going to go much higher than people expect. Even before the EV revolution, it was always projected that there would be a rising deficit in 2020/21 and I think that’s really going to be exacerbated now.

“There could be a period of years when copper prices really surprise people on the upside. We’re looking for good copper projects, but everyone on the panel has remarked, they’re not that easy to find,” Treger said.

Metal Bulletin research head William Adams reported that a Metal Bulletin price survey showed that people were bullish on copper and the consensus was that the price has not seen the top.

Consumption has been climbing at a rate of some 700 000 t/y, which is equal to 1.5 to two mines every year, a tall order for producers to have to deliver.

On the possibility of aluminium spoiling the party for copper, Schmitt said that aluminium was already in widespread use as higher voltage cables and if the price of copper went through the roof, there might be aluminium substitution in some areas.

“But I don’t see aluminium as a big threat to copper,” he added.

Besides the expectation that China would continue to be a major driver of demand for copper, there is also an expectation of rising demand emerging in India.

“My theory is that we’ve endured such a bear market for so long, everyone is too gun shy to present a more advanced forward prediction. Hopefully our team is right and I can sit here next year and that we can all acknowledge that the outlook for copper is even rosier than all the panellists see right now,” said Investec mining analyst Hunter Hillicoat, who moderated the panel discussion.