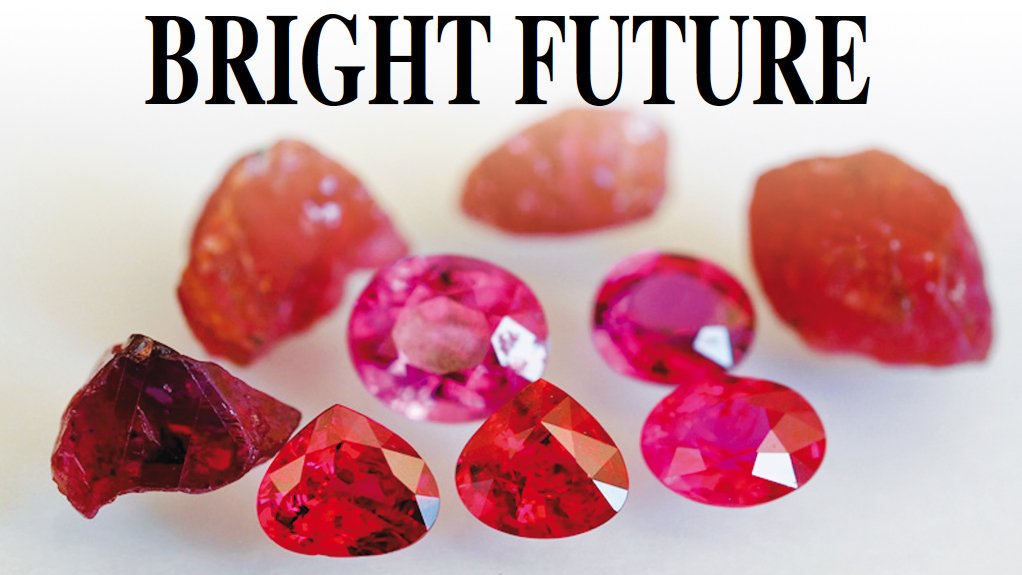 Photo by: Gemological Institute of America

JOHANNESBURG (miningweekly.com) – The shift from small-scale artisanal mining to larger mechanised mining, owing to the increasing involvement of larger mining companies and greater formalisation of the sector, is expected to increase the distribution channel of the coloured gemstone industry, which will continue to consolidate as smaller market participants disappear.

This is also likely to result in improved transparency of the coloured gemstone industry over time, as larger mining houses are accountable to their shareholders as well as local and international operating regulations.

This is according to nonprofit organisation representing the coloured gemstone industry the International Coloured Gemstone Association former VP and senior industry analyst Jean Claude Michelou, who predicts that, in time, there will be “strong growth” in the sale of coloured gems in Brazil, Russia, India and China, particularly in India and China, which have a long-standing affinity for coloured gems.

The advancement of the coloured gemstone market, like the jewellery sector, in general, continues to bifurcate as it grows at the lowest and highest ends of the gem value chain, while generally remaining stable in the middle, according to nonprofit gem research institute Gemological Institute of America senior industry analyst Russell Shor.

He tells Mining Weekly that the most reliable estimates of yearly coloured-stone sales at retail level are in the $18-billion to $21-billion range, which includes the total cost of jewellery pieces, mountings and side stones.

About one-third of this is ruby, with emerald and sapphire accounting for an additional 25%. However, this does not include jade, nearly all of which is sold in China.

Shor says the market fundamentals for quartz-type stones, such as amethyst, citrine and blue topaz, remain good because they offer “budget-conscious” consumers a “larger look” for their money. Shor also notes that demand for the Burmese ruby and the Colombian emerald remains strong among wealthy buyers, particularly if they are untreated.

COUNTRIES OF INTEREST
Michelou comments that reform of Colombia’s legal framework regarding the emerald mining industry, with emphasis on attracting foreign investment and setting standards for the mining industry, is transforming the country’s emerald industry.

Moreover, he points out that new deposits of emerald, grossular and opals are being investigated in Ethiopia and might soon be mined on a medium to large scale, noting that Mozambique and Madagascar have large unexplored resources.

Michelou expects many announcements to be made regarding investment in these countries this year.

“Nigeria also has a proven resource of gemstones, with some of the largest pegmatite and tourmaline deposits in the world, particularly rubelite, as well as indicolite. Large local artisanal and mechanised mining has been in place for many years and is organised in the traditional African way of ‘sponsoring and sharing’ for each pit.

“The Mambila sapphire occurrence in Taraba state is entering into large-scale mechanised production in the next few months under a Nigerian company. This is seen as a significant new source of sapphires in Africa,” Michelou highlights.

Additionally, Shor tells Mining Weekly that Myanmar, in Asia, was the world’s most prolific ruby producer until the US embargo on ruby and jade imports in 2008. In September 2016, these sanctions were lifted and he believes this could result in increased interest in the country’s gemstone sector.

He remarks that, while the gemstone trade is one of the oldest and most globalised industries, the way in which business has been conducted has not changed significantly, at least not compared with other industries.

However, Michelou believes that several forces are reshaping and transforming the industry, such as regulatory reforms in precious minerals, banking, environmental and labour regulations, and the positive impact of the rise in global access to information through the Internet on distribution channels and points of sale, with bigger, well-financed corporations also entering the industry.
He laments that determining an accurate value for the total size of the industry is “impossible”, owing to the informal nature of most of the industry.

“Most numbers that circulate are a sophisticated guess at best, with some huge variances in most cases. In my opinion, the best method to estimate the industry size is to look at the value of coloured gemstone jewellery and add a percentage of high-end stones which are traded but never set in jewellery.”

Gemfields CEO Ian Harebottle notes that, while its Montepuez ruby mine, in Mozambique, is outperforming its Kagem emerald and beryl mine, in Zambia, the company is “reasonably pleased” with the overall performance of all its operations.

During the six months to December 31, 2016, Kagem produced 10.7-million carats of rough emerald and beryl. This is lower than the previous equivalent period and Harebottle attributes this mainly to the varied nature of emerald mineralisation and the mining of lower-grade areas. He says these challenges have forced the company to reduce the targeted production numbers for the 2016/17 financial year to some extent.

Gemfields completed a significant upgrade to the wash plant at Montepuez towards the end of last year. This project included the replacement of almost all the existing processing equipment and is set to deliver a targeted processing rate of about 150 t/h, Harebottle explains.

The total production at Montepuez over the six months ended December 31, 2016, was 5.6-million carats of rough rubies and corundum, at an average grade of 29 ct/t. Harebottle highlights that this was further supported by a 52% increase in the overall volume of premium-quality rubies recovered, compared with that of the previous period. This boost in production was achieved despite the processing plant being shut down throughout December to allow for the upgrades.

Additionally, he says, Gemfields is pleased with the performance of its gems at auction during the 2016 financial year.

“As a result of the ever-increasing global demand for Gemfields coloured gemstones, total revenue generated since our first auction in 2008 has exceeded $700-million, an impressive achievement, given the challenges faced by the mining and luxury goods industries during this same period,” Harebottle points out.

Gemfields also achieved its highest-ever auction revenue in June 2016 in Singapore, where the auction of rubies from Montepuez resulted in 95% of the higher, medium and commercial goods available sold for $44.3-million.

Harebottle contends that Gemfields’ success is attributable to its “widely acclaimed” proprietary rough grading system, alongside the stock inventory it holds to ensure its product offering has a high level of consistency.

The company has always positioned itself as a mining company that markets, focusing on supporting an increase in the supply and demand of coloured gemstones, he adds. The acquisition of luxury jewellery business Fabergé, in 2009, enabled Gemfields to accelerate its vision of raising the international presence and perception of coloured gemstones.

Harebottle highlights that Fabergé has continued to expand its global presence. In addition to the directly operated stores, Fabergé has increased the number of multibrand retail partners it works with to 41. Fabergé products are now available in Australia, Azerbaijan, Bahrain, Canada, the Czech Republic, France, Italy, Malta, Qatar, Saudi Arabia, Switzerland, Thailand, the United Arab Emirates, the UK, Ukraine and the US.

He says this growth is also reflected through sales, with transactions during the period increasing by 53%, compared with the half-year ending December 31, 2015, while the average selling price per piece increased by 30% over the same period.
Fabergé launched new collections at BaselWorld 2017, in Switzerland, in March, including fine jewellery pieces, and expanded its timepieces collection in collaboration with world-leading Swiss watchmakers.

Fabergé has won the prestigious Grand Prix d’Horlogerie de Genève (GPHG), the Swiss watchmaking industry’s highest honour, for the past two years, while its Visionnaire dual time zone (DTZ) timepiece won the award in the Travel Time category this year. “The award cements Fabergé’s position as a leader in the watchmaking industry,” Harebottle enthuses.

Fabergé has also initiated the product launches of the #SayYesInColour emerald, ruby and sapphire engagement rings and the #DTZ GPHG-winning men’s timepiece, the Visionnaire DTZ, during the past year, which Harebottle says were “extremely well received”.

Moreover, he states that the resurgence of coloured gemstones in the luxury sector has been most notably demonstrated by the “exquisite coloured gemstone collections” of the leading jewellery houses, including Pomellato’s Pom Pom jewels, Piaget’s Sunny Side of Life collection, Cactus de Cartier, and the new Bulgari, Louis Vuitton and Chopard creations. Harebottle notes that, along with Fabergé, French jewellery designer Chaumet also recently introduced comprehensive coloured gemstone engagement ring collections.

“The clear shift in consumer trends and the increased urgency with which so many of the world’s leading luxury brands are beginning to embrace coloured gemstones remain extremely encouraging and provide for a continued long-term positive outlook for the sector,” Harebottle concludes.